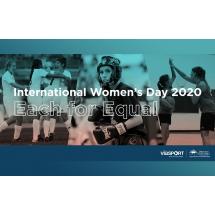 Each for Equal: What can we do as individuals and organizations to advance gender equity in sport and beyond

On March 10th, Squash BC, along with other leaders in sport and recreation, shared “promising practices” when engaging girls and women in sport.  Natasha Doucas, President of Squash BC, discussed the positive impacts of the organization’s initiatives on women and young leaders in sport, through its success with Women’s Squash Week, the Emerging Female Leader Grant Program and also the Emerging Female Forum.

Sharing in the panel discussion were peer leaders in Freestyle BC, Tennis BC, BC Adaptive Snowsports, and the Provincial Commissioner for Girl Guides of Canada.

The panelists emphasized the need for champions and leaders to ensure women’s voices be heard and to “create a safe space where girls can get to know each other and feel included, ease and comfort will allow them to learn better”.

This has been the approach of SquashBC’s Women’s Squash Week initiative since the organization took a successful local campaign in Vancouver and brought it to clubs and facilities throughout the province of BC a few years ago. This provincial initiative led by the organization’s Women & Girls in Squash Committee introduced a Female Ambassador program to drive more female engagement and participation.  This approach has helped foster more participation of the game. One example is from the Squamish Squash Club where a record 58 women participated in Women’s Squash Week, 26 of whom were new players to the sport. There are many more similar success-stories from all around the province.

Another theme brought up during the panel discussion was the topic of ensuring a “seat at the table” for women.  Referencing viaSport CEO Charlene Krepiakevich’s opening remarks, regarding building the confidence in girls and young women to create change, Natasha spoke about girls and young women knowing their value and holding their place when speaking up and sharing their thoughts for change.

The discussion continued on organization leadership. Squash BC has strived to have a gender equitable board and leadership structure. Having women on staff, on the Board, and in our committees has helped bring attention to female programming. This is positively impacting participation in squash and the culture of the sport.